Trump setting up for confrontations in his legal entanglements and the world stage and we can’t tell which battle is supposed to be a distraction from which.  No matter what, this is all bad.  If we ever had a reason to fear the worst in Trump, those fears are being realized.  All of them at once.

On the economic front. Trump announces unilateral tariffs against China which both undermines our own economic prosperity and raises the specter of continual retaliatory tariffs.  The news immediately sent the stock market tumbling.  Coupled with Trump’s inane attacks on entire sectors of our domestic production outside of banks or fossil fuels, and his short-sighted, voodoo-economics tax reform, and the GOP’s continual dog-piling on the national debt, it is clear Trump is bent on mindlessly destroying our economy when he believes he is returning us to the status quo of the 1950s. 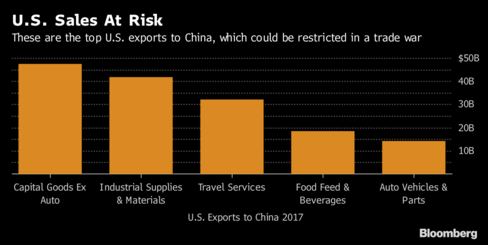 On the legal front, John Dowd has quit his mostly leveled headed tenure as legal representative and Trump hires the fluffy-headed, Fox News contributing, fucktard Joe diGenova to represent his conspiracy theory best as defense to the Mueller investigation.  This has nothing to do with actual legal representation and everything to do with creating a narrative to stop the Mueller investigation.

“His is not merely a rhetorical stance: Bolton actively conspired during his tenure as the Bush administration’s policymaker on Iran from 2002 through 2004 to establish the political conditions necessary for the administration to carry out military action.”

His desire for war with Iran and/or N. Korea is well documented as he’s been tooting that horn on Fox News for awhile.  In his brief interview…all of 30 minutes after his selection was announced on Fox News, one of the few things he was willing to say was that: it was his duty to make sure that the president had the full compliment of options on the table at all times and to ensure that any presidential command was carried out.  He wasn’t prompted to say that, he was, of his own accord, ecstatic to say that.

We have had no desire for Mueller to hurry his pace any faster than was absolutely necessary, but now…perhaps now we are starting to feel the pangs of panicked concern.