A second lawsuit is filed against Fox News, Fox News reporter Malia Zimmerman, and Republican Donor and frequent Fox guest Ed Butowsky.  The first lawsuit filed against the same parties was from the private detective, Rod Wheeler, in this truly disgusting and purposefully orchestrated effort to make appear that the murder of former DNC staffer Seth Rich was related to the fabricated narrative that Rich had been the true source of Wikileaks hacked DNC emails.  All of this fabricated to give the Trump administration and the fucking Russians cover from having had any benefit or involvement in what was the true goal and instigating parties to the DNC hacks in the first place.

There was exactly zero reasons to make the connection between Seth Rich and Wikileaks release of the stolen emails except for one convenient coincidence in that Wikileaks published the stolen emails on July 22, 2016.  Seth Rich was killed in a botched robbery on July 10, 2016.  That is all that Fox news’ Zimmerman and Butowsky required to create this entire story.  It was around the same time.

Butowsky won the trust of Seth Rich’s parents and hired the private detective Wheeler, on their behalf, supposedly with the intent of finding their son’s killer, when the true intent was to use Wheeler as a tool to further the narrative Butowsky and Zimmerman had already cooked up: Seth Rich leaked the emails to wikileaks and the Clinton campaign somehow attempted to block the investigation into Rich’s death.

A key component to this Butowsky and Zimmerman creation was passing along to Wheeler the “fact” that Seth Rich had been in touch with Wikileaks, and then quoting Wheeler as the source of that information as he was the hired investigator.

From the Rich family’s lawsuit:

That news article was shared by Butowsky with Sean Spicer, who was being kept informed of the story and also allegedly shared with Trump himself who approved of the entire process.  Also, not surprisingly, Julian Assange in this video lends his support to the entire fabrication, by his very clever suggestion just weeks after rich’s murder, that people get killed when they give him information.

Thereafter, Wheeler (who didn’t know he was about to be the fall guy), Butowsky and Zimmerman go about hyping the story to various outlets and particularly Fox talent in order to create a seemingly well sourced and generally accepted “truth”.  Of course our boy Sean Hannity can’t get enough of the shit once he gets his hands on it.  Butowsky want’s to keep his name out of it, because he already has his patsy in Wheeler and a “true believer” in Zimmerman.

Here’s towards the end of the life cycle of this honest to goodness, actual, fake news, where you can sense this shit is about to fall apart:

Wheeler is suing the above mentioned for the damage done to his career and lose of future earnings, which in this case, is for real and true, a real consideration and not one of those throw-away, add-on items in a lawsuit just for the hell of it.  This dude got cooked for his unwitting part in this scheme.

This is how Fox News does it:  Create or locate a source, have third parties be responsible for reporting the source, and then quote the the third party’s statements as a news story, thereby making it “true”. 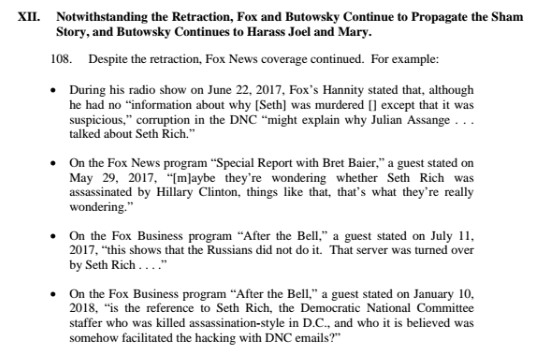 This is just unbelievably awful stuff.  You can understand the Rich family’s suit is not a frivolous thing.   Just fucking awful:

The Rich’s are seeking at the least $75k for what they have endured at the hands of Fox News.  Look, no amount of money is going to bring their son back, but in this case…the way these poor people were abused by Fox and it’s agents, for Fox’s own gain and Fox’s running political interference to further their own agenda and attempt to absolve the Russians, Trump’s benefit thereby, and simultaneously dirty the name of Seth Rich…I’m fucking pissed and we all should be.  This is a fucking outrage. 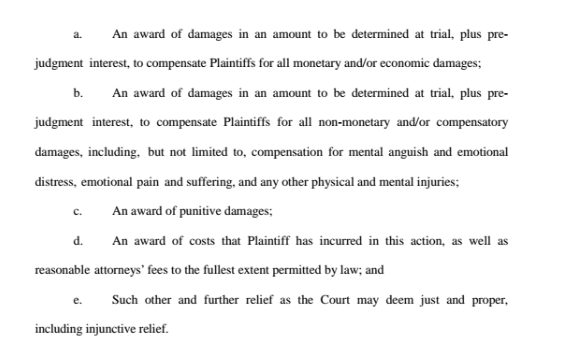